Gaiety Theater is a famous landmark of Shimla. Nestled between The Mall road and Ridge, this building has been a major cultural center of Shimla since the 19th century.

Today, it continues to hold plays, exhibitions and other events with the purpose of encouraging art and culture in Himachal Pradesh. Although Gaiety Theater still remains a point of attraction for both tourists and locals, an increase in footfall will only help in supporting this building and its purpose of promoting the arts.

1. Designed by Henry Irwin in Gothic Style of Architecture

Named after the famous Gaiety Theater of London, this building was originally designed as the Town Hall.

It was built in 1887, designed by Henry Irwin. The architectural style was neo-gothic and part of a revival of gothic architecture that was occurring in Europe and other parts of the British Empire.

This is the guy: 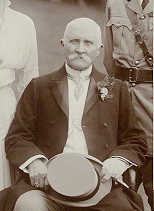 And this is London Gaiety Theater

2. The Same Guy Designed the Viceregal Lodge too.

Yes, Henry Irwin also designed the Viceregal Lodge that hosts the IIAS today. Hell of an architect, he was famous as Architect of Palaces.

The building was designed as the Town Hall and was the tallest structure in the little colonial town of Shimla.

It contained a theater, a library, a ball room, a police station, a Masonic hall, a hall for public meetings, two reading rooms, two retiring rooms, a drawing room, a bar and a card room.

4. It Was Britishers’ Favorite Hang-out in Shimla

It was the place to be in Shimla and all young officers and their wives made their way to this place to get a European entertainment experience right here in Shimla. This magnificent building was found to be structurally unsafe because the stone used for construction wasn’t of good enough quality. In 1912 it was declared unsafe and a complete demolition was planned. But eventually only the upper floors needed to be demolished and the lower floors survived.

With recent renovations the building stands as strong as ever today and is ready for another century of art and culture.

You can see the coat of arms of the Amateur Dramatics Club hanging on the door to the upper level of Gaiety Theater on the Ridge. The ADC is one of the oldest clubs of its type in the world and continues to operate to this day.

Many renowned personalities have been a part of the ADC and it has an unbreakable link to the history of Gaiety Theater itself.

7. The Mecca of Theater

Gaiety Theater has turned into a sort of Mecca for theater artists over its long history. Many great men such as Rudyard Kipling, Baten Powel, K.L. Sehgal, Prithvi Raj Kapoor, the Kendall’s, Balraj Sahni, Pran, Manohar Singh, Shashi Kapoor, Raj Babbar, Naseeruddin Shah and Anupam Kher have performed on the stage of this theater. All theater artists are aware of the consecrated past of the Gaiety Theater.