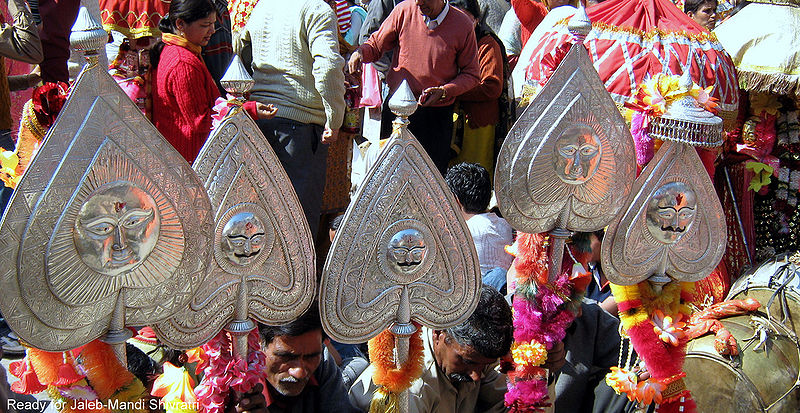 The town of Mandi is once again ready to transform into grandeur of celebration with the Mandi Shivratri Festival beginning from the 10th of March this year. A seven day festival, it invites over 200 gods and goddesses from hundreds of temples located in Mandi and Kullu Valley, to participate in the big celebration.

The celebrations begin with the Shivratri and goes on for the next 7 days. According to the Hindi calendar, the festival is held every year in the month of Phalguna, which comes around the February and March.  This is the day of Krishna Paksha or the 13day/13th night when the moon begins to wan.

Today, the popularity of the festival has crossed borders, and the increasing number of foreigners who visit Mandi during this time has rendered it an international fest.

The fest begins by welcoming the local gods and goddesses (devtas and devis) at the Madho Rai temple, where they often arrive in lavish palanquins or rathas carried by local villagers or sevaks. The metal images of the gods clad in red, green and yellow attire are garlanded with fresh flowers, and brought to the town in great comfort from far off distances. Sometimes, these gods and goddesses travel for 10 days to reach here.

The Madho Rai temple, dedicated to Vishnu’s Avatar, Mahdo Rai, was built during the 16th century by the first celebrated ruler of the Valley, Raja Ajbar Sen. The ruler had 18 sons, but they could not live long to take the heirs of his empire.

The king then decided to build a temple, and installed a silver image of Radha Krishna, called Madho Rai. He proclaimed him as the ordained king of the lands for all times to come.

Since then the town has acquired a theocratic characteristic, which clearly comes alive during the festive celebrations.

According to a legend, ruler Sen (1499-1534) saw in his dreams a cow offering milk to an idol of Lord Shiva. His dreams turned into reality when he himself saw the cow offering milk to an idol. He then constructed a temple there in 1526 — the Bhutnath temple, dedicated to Lord Shiva. Simultaneously, the foundation of Mandi town was also laid and he shifted his capital here

With great fervor, the crowds sway and dance to beats of the drums and pipes all along. This yatra is colloquially called the ‘Zareb.’

This marks the commencement of the Mandi Shivratri fest.

The second day of the festival is as much charismatic as it can be, with a pageant of gods held at the Paddal, an open ground at the confluence of the Beas and Suketi Rivers. It is perhaps a sight to behold, when all the deities dress up in their best attires for the fest. Folk bands, dancers, devotees, local drummers all rev up to make the event remarkably pious and memorable.

While religiosity dominates the Shivratri Fest, over the years it has also become important for local traders, who get an opportunity to sell their merchandise to a large gathering like the one present during Shivratri. Handicrafts and traditional jewellary occupy maximum prominence for outsiders, while local products like wool, opium, walnut, ghee, take a back seat. People from nearby villages often stop by to purchase regular items like utensils, and accessories for their daily lives.

All through the fest, the place remains in a trance of music and dance, with cultural programs often on the list of activities scheduled every day, sometimes having celebrities performing live during the evenings.

On the concluding night of the fest, a Jagran is organized, and a guru and his disciple are chosen to give prophecies for the coming year. Visiting deities than offer their final prayers to Lord Shiva, and depart back for their abodes. Before leaving, they leave behind colorful chaddars, a form of devotional drapery, offered to the Gods.

A mix of fun frolic and prayers, the fest invites people from all walks of life. Rich, poor, Indian, foreigner, they all gather to celebrate the favorite day of Lord Shiva, Shivratri.

The conduit between the mortals and the deities are the ‘gur’ – the traditional shamans of Himachal, who form the core of the communities’ spiritual sustenance. The ‘gur’ mediates between the people and the gods.

If reading all this makes you want to come to Mandi, you still have time. The small town in Himachal Pradesh can be easily approached via road from Delhi, Chandigarh, Shimla, and Pathankot. The nearest railhead is at Joginder Nagar, and the closest airport is at Bhunatr, about 45 km from here.