Today Shimla is one of the most popular holiday destinations in India. This popularity was not gained recently but is a legacy that has been preserved since the 19th century.

The European architecture that has been maintained to this day, along with the cold weather, which comes naturally when you are nestled in the lap of the Himalayas, makes one feel as if they are visiting a small European hamlet instead of an Indian hill station. The story of Shimla starts with the beginning of the 19th century before which Shimla was nothing more than a forest with a temple located on Jakhoo hill. In early 1800’s the Gorkhas of Nepal attacked areas of Himachal, Uttaranchal and Uttar Pradesh. The Anglo-Nepalese war ended with the signing of the Sugauli Treaty of 1816.

After the war most of the land was returned to the local chieftains who had fought on the side of the British. The Maharaja of Patiala was also awarded land in the area. The first Britisher to live in Shimla was The Assistant Political Agent in Hill States, Lieutenant Ross, who stayed in a wood cottage in Shimla in 1819. The first one to build a proper house was Charles Pratt Kennedy who built the Kennedy house in 1822.

The stories of a place which had “English weather” soon spread through the British ruling elite of India. It was a godsend for the British who had always struggled through the summer months of the Indian plains.

British officers and their families started spending their holidays in Shimla and soon a little settlement of 30 houses, mostly around Jakhoo hill, developed by 1830. The British acquired the surrounding land from the Maharaja of Patiala and the settlement grew rapidly to over 1,141 houses by 1881.

Shimla became the centre of art, theatre, technology and social gossip as every year the who’s who of the British elite found their way to Shimla.

Due to uneasy access and limited lodging it became a matter of pride to spend the summer in Shimla. With a lot of available single army officers holidaying in Shimla, who were promptly followed by ladies looking for marriage alliances, it also became a place of parties, balls, festivities, scandal and gossip.

In 1844 the foundations of the Christ Church was laid down followed by the building of the Hindustan-Tibet road in 1851. In 1863, the Viceroy of India John Lawrence declared Shimla to be the summer capital of the British Raj. The ridge and the upper bazaar were cleared to put up administrative buildings. 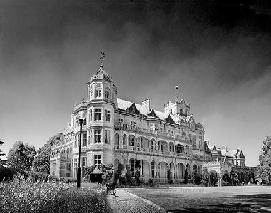 The Viceregal Lodge was built in 1888 which was

later turned into Rashtrapati Niwas after independence and now is the Indian Institute of Advanced Studies. This one building alone has hosted many great men and women over the years including 13 Viceroys of India, Lord and Lady Dufferin, Pandit Jawaharlal Nehru, Maulana Azad, Mohammad Ali Jinnah and more recently Aung San Suu Kyi who was a fellow at IIAS for two years.

The Shimla Kalka Railway line was constructed in 1906 to improve the ease of access. The British found Shimla to be a home away from home. Even though it was technically the summer capital, the British Raj spent 7 to 8 months here from early April to early November. They shifted to Calcutta and later Delhi only during the winter months.

Shimla was the capital of one of the largest colonies in the world for almost 84 years for one and only one reason; the British considered it a home away from home.